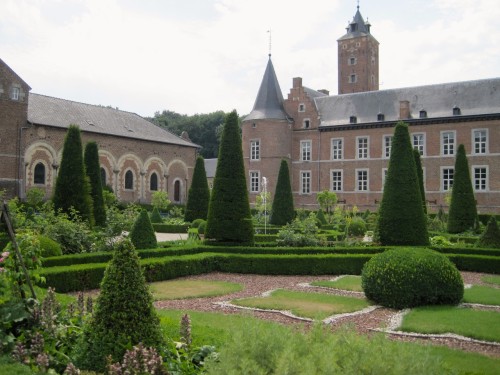 A brotherhood of knights, sworn to defend the Holy Land and dedicated to caring for the poor. A powerful military order with strongholds throughout Europe, ruled by a Grand Master. A wealthy organization within the Catholic Church, entrusted with lands belonging to the Holy Roman Empire.

If this sounds like the beginnings of a thriller in the style of The DaVinci Code, or the tagline from the latest Hollywood epic—Guess again. The Teutonic Order really existed, and it ruled parts of Flanders for hundreds of years. You can visit their headquarters at Alden-Biesen, which is now an official cultural center of the Flemish Community.

Located between Tongeren and Maastricht in Limburg province, the Land Commandery of Alden-Biesen is a beautifully restored complex consisting of a moated castle, a chapel and other buildings, along with formal gardens, an English park and ancient orchards. Not just a museum of historic architecture, the estate hosts cultural events throughout the year and functions as a conference center for businesses and organizations. 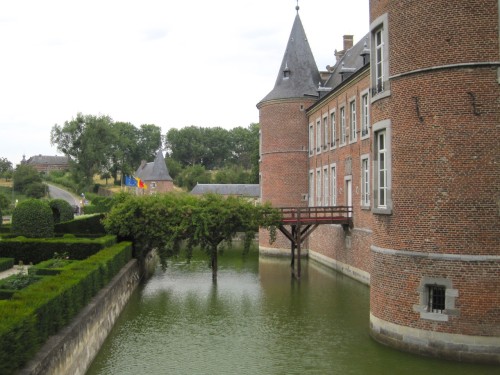 The castle and moat

I have been to Alden-Biesen several times now, and each time it’s a different experience. The first time I visited, it was late summer and the French gardens were lush and green. I watched the fish swimming in the moat, took a walk in the English park and ate lunch sitting at one of the picnic tables. It was a perfect Sunday afternoon.

Now, in February, the gardens are covered in snow and the moat is frozen. My eyes are drawn to the red brick of the buildings, the shapes of the castle’s towers against the sky. I step into the chapel to get out of the cold and find myself enjoying the stillness and solitude within. I think about the people who built this place and lived their lives here, long ago.

Where Alden-Biesen now stands, there was once a small chapel at the crossroads of two main trade routes in the Middle Ages. In 1220, the Count of Loon donated the chapel to a new military order, the Order of the Brothers of the German House of St. Mary in Jerusalem, known in English as the Teutonic Knights. The order was founded during the Third Crusade to care for German-speaking pilgrims and knights in the Holy Land. 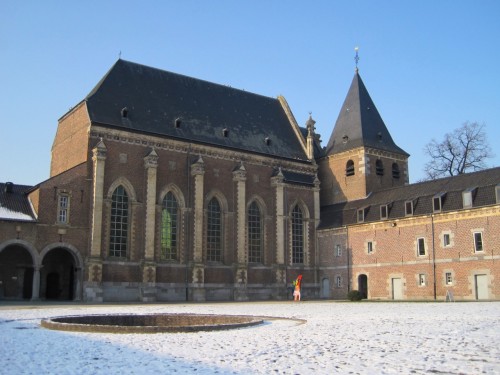 The chapel in winter

Like other chivalric orders such as the Knights Templar or the Hospitallers, its members were drawn from the nobility, who took a vow of celibacy and dedicated themselves to serving the poor. In fact, the Teutonic Order grew into a powerful and wealthy organization with lands throughout Europe. The Land Commandery Alden-Biesen was their headquarters in the Maasland region and ruled over 12 smaller commanderies.

Along with other Catholic organizations, the Teutonic Order lost all its holdings in Flanders when the French took possession at the end of the eighteenth century. Alden-Biesen was auctioned off to the highest bidder and passed into private ownership for 200 years. Eventually, it fell into disrepair; a documentary from 1964 shows black-and-white footage of an abandoned, neglected site.

Following public outcry, plans were made to sell it to the Flemish government. On the last day of negotiations, a fire broke out in the castle, the result of fires lit by the owner in long-unused fireplaces. The castle was completely gutted. The authorities went ahead with the purchase and began a program of restoration that continues to this day. 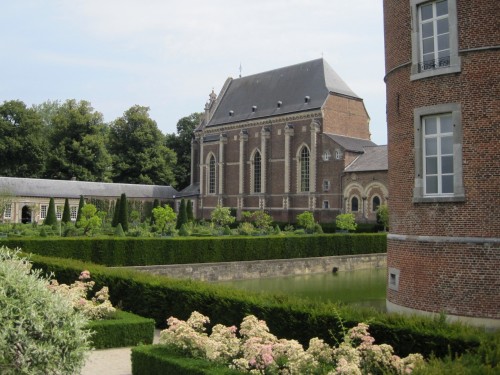 The current buildings date from the seventeenth and eighteenth centuries. The castle has been thoroughly and expertly returned to its former state, including several rooms of the Land Commander’s apartment that appear as they did in the eighteenth century. Other buildings have been renovated to reflect their original appearance from the outside but have been put to new uses on the inside.

Former stables and barns now house modern conference rooms, meeting rooms, reception areas and accommodations for up to 68 people. The former tenant’s house now serves as a tourist information office for the surrounding area. And the entire complex is used for events and exhibitions, including an International Storytelling Festival coming up in April, the Scottish Weekend in September, and Sintpaleis, a popular attraction for children, in November. However, the best times to visit may be when there are no special events and no crowds to distract you from the beauty of the place.

Coming from the parking lot, you will pass the castle and enter Alden-Biesen through the lower gate. The old guesthouse there is now a brasserie, appropriately named ‘t Gasthuis, where you can enjoy a cold drink on the outdoor patio in summer, or duck inside for a coffee in winter. They also serve a full menu for lunch and dinner. 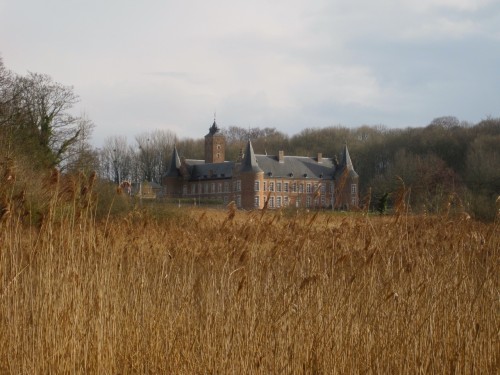 If you continue walking down the cobblestone lane leading from the gate, you will pass orchards on your left and the former stables on your right. This road leads to the main gatehouse, which was once the main entrance to Alden-Biesen and now serves as a nature education center. It’s situated at the intersection of several cycling routes, and is a nice place to depart on a hike of the surrounding countryside.

Another gate leads from the cobblestone road into the main complex. Be sure to stop first at the welcome center, just inside the gate on your left. There you can take in a small exhibition about the history of the Teutonic Order and of Alden-Biesen (in English, French, Dutch or German). Afterwards, take your time exploring the grounds, the castle, the French garden and the chapel.

The site is open year-round and admission is free. No matter when you decide to visit, Alden-Biesen has something to offer, whether it’s a glimpse of history, an encounter with art, a stroll in the park, or a chance to be alone in the midst of beauty.