Belgium finally gets a beer museum

The most surprising thing about the new Bruges Beer Museum is that it’s the first of its kind in Belgium. How is it possible that a country with such a rich beer culture and a worldwide reputation for brewing didn’t have a museum dedicated to its most beloved beverage? That’s the question that prompted Thibaut Beckaert to start his museum, together with business partner and longtime friend Emmanuel Maertens.

Beckaert was visiting Prague with his sister when he came across not just one but two beer museums in the Czech capital. “So I was thinking, Is there a beer museum in Belgium? I didn’t even know. So I started Googling it in Prague, when we were at a pub having a beer. I saw that were a lot of places that you can visit, mostly breweries. But they always tell the same story. It’s always the history of that brewery, and they explain how they make their beer.” 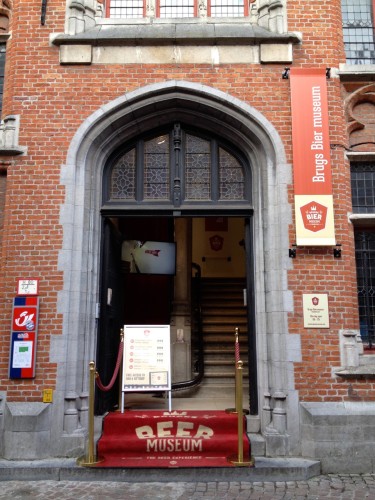 The entrance to the new museum in Bruges

The Bruges Beer Museum aims to tell the complete story of beer, from its earliest history to its modern role in gastronomy, from the local breweries of Bruges to beer production worldwide, from the brewing process to the best way to taste and appreciate beer.

Visitors receive an iPad Mini and a set of headphones. There is no text to be found anywhere in the museum. Instead, the museum-goer holds the iPad up to an image on the wall or an object and gets all the information on that topic via the iPad.

“The museum is based on a technology called augmented reality,” explains Lars Pillen, the museum’s Operations Manager. “What you do is you aim the iPad at an object in the museum, and they’re all scannable. And then you have three options on the screen: I want to read something, I want to see something, or I want to hear something. For instance, I’ll choose read, and then I get the story behind the item over there. It’s the same story either spoken and written out.” 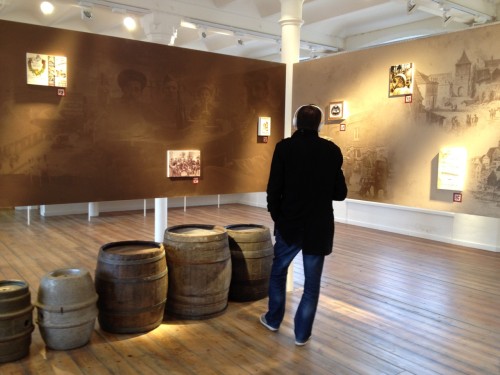 At the moment, the scannable pictures and objects have QR codes, but as of January 2015, a new system will do away with the codes and use a combination of image recognition software and proximity beacons to access the information.

Because all of the text and audio is accessed via the iPad, the museum is able to offer many language options. “There’s a very diverse international public in Bruges,” according to Beckaert. “So we wanted everything to be in ten languages to start with. Other languages will follow next year. The idea is that somebody who speaks only Russian, the moment he clicks on ‘Russian’ the whole tour should be in Russian.”

The museum is divided over three levels. The first level, a bright space with floating wall panels and stylish graphics, covers the history of beer and beer culture. 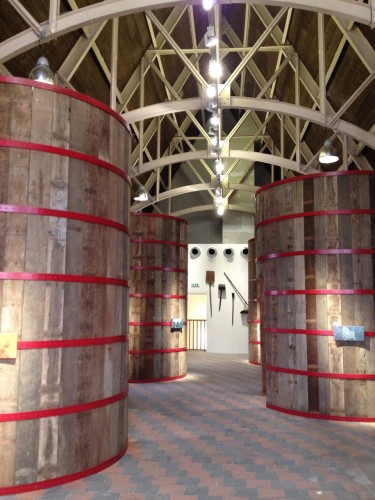 Beckaert is enthusiastic when describing the different topics covered: “Beer and gastronomy, beer pairing, cheese pairing. Beer in the world; for example, if you’re from Italy, what’s the history of beer in Italy? Women and beer, because that’s a really hot topic right now. Beer was always brewed by women, never by men. So that’s a nice story to tell. Then the different beer styles: What’s an ale? What’s a porter? So not only the Belgian styles.”

The upper level, installed in the renovated attic of the building, has a completely different look from the first level. Four immense wooden tuns, custom built on-site, dominate the room. A doorway has been cut into the wall of each tun and inside are scannable images related to the ingredients of beer, the brewing process, the four kinds of fermentation, and beer tasting. Around the edges of the room, old brewing implements and wooden casks create a more traditional museum-like atmosphere.

An attractive mural painted on the back wall is devoted to the Trappists. “We have all ten Trappist beers painted by some young artists here in Bruges,” says Pillen. “All the abbeys and their beers are painted, and the abbey is scannable and the beer is scannable, so you can learn about the beer and also about the abbey.” 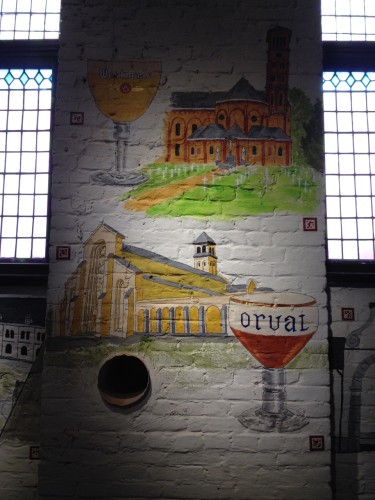 Artwork depicting all the Trappist breweries

The tour ends in the tasting room, a large beer café with windows overlooking the Markt. Here the visitor hands in the iPad and receives three 15cl tasting glasses of their choice from the 16 beers available on draft. The café is open to visitors without a museum ticket as well, and features a library corner with shelves of books about beer.

Palm owns the Brugge Tripel and Steenbrugge abbey beers, which were formerly brewed in Bruges. These are among the beers available for tasting. The bar also has three exclusives on draft: Boon Oude Lambiek, Unfiltered Palm and Foederbier Rodenbach. 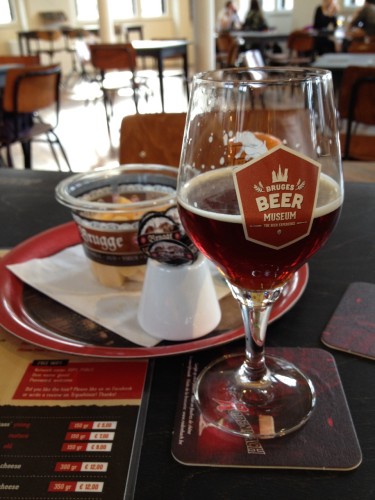 At the moment, the museum is still a work in progress. The images that are accessed via the “See” link on the iPads lack explanatory text, making it the weakest part of the presentation, and in some cases there are no images at all. Many sections of the museum, especially the parts related to the brewing process, would probably benefit from some video clips showing the different activities involved.

Beckaert says that they currently have 1300 images and 32 film clips that will be added as of January, when the new scanning system will also be installed. But he has even bigger plans for the future.

“The content of the museum—the pictures, the movies, the know-how that we’ve built up—that we’re going to keep,” he says. “But the device itself is temporary. I’m sure that three years from now, we won’t have iPads anymore. Maybe we’ll go to Google Glass or something completely different, something more with augmented reality, where you can see somebody brewing, for example, without him being there.” 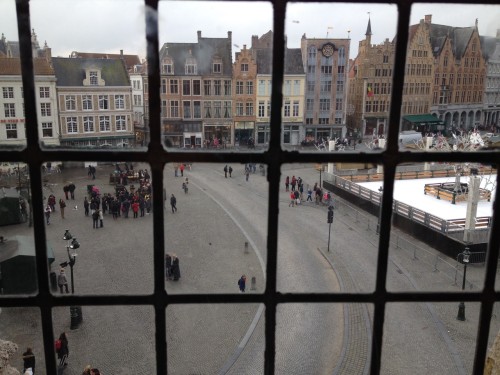 View of the Markt from the museum café

Beckaert, a philosophy major at university and a stone carver by trade, is not the most likely person to have founded a museum dedicated to beer. But he clearly has the energy and ideas to make it successful.

“We were just two young guys who were really passionate about beer and couldn’t understand why there wasn’t anything similar in Bruges or in Belgium. So we had to do it our way. We were obliged to do it like that because of the budget. The thing is, when you have a really small budget you start thinking more creatively.”