On a perfect spring day in early May, my husband and I stood in the courtyard of a seventeenth-century farmhouse, sipping hand-mixed cocktails and chatting with our fellow guests. Our host, Didier Bastiaens, mounted an overturned apple crate and welcomed us to Vrienden van de Smaak, a moveable feast that travels around the Flemish countryside throughout the summer months. The farm-to-table movement has found perhaps its purest expression here in Belgium.

Vrienden van de Smaak (Friends of Taste) is now in its third year of bringing together diners, local producers and celebrated chefs in unique outdoor locations. Past venues include the limestone grottoes of Kanne, an Art Nouveau greenhouse and a vineyard in Dranouter. The locations and chefs vary, although a few chefs return every year. 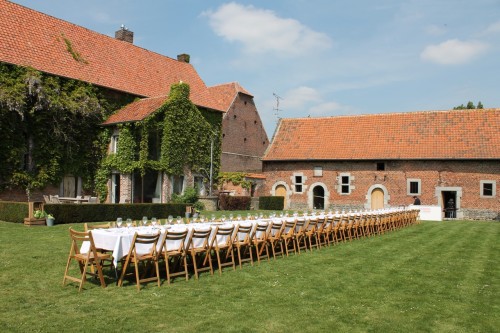 The long table set up outside

Our dinner took place at the privately-owned Herkenrodehoeve in Limburg, which was originally built for the nuns of Herkenrode Abbey. The menu for the evening, prepared by chef Vincent Tibau, incorporated local agricultural products as well as beer from Limburg craft brewers. Furthermore, each course was paired with one of the beers. Two of the three brewers featured on the menu were present among the diners and gave a brief explanation of each beer as it was poured.

The dinner started in the farm’s courtyard with cocktails prepared by mixologist Jef Berben, and—for the non-drinkers— apple juice from Haspengouw. We nibbled on hors-d’oeuvres that included the Flemish classic, rabbit with prunes, prepared with Eau-de-Bière from Wilderen Brewery, and bite-sized cheese croquettes made with Wilderen Kanunik, a blonde triple. 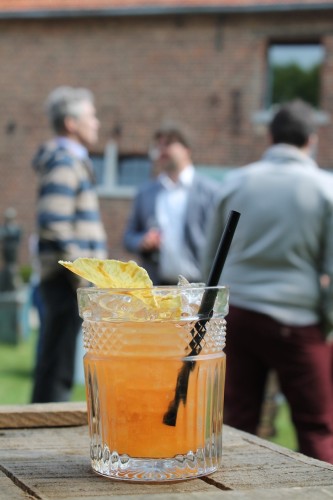 Our appetites whetted, we turned our attention to Didier, standing on his apple crate. He introduced himself, the chef, the owner of the farm and the brewers, and gave a brief overview of the evening’s program as well as the philosophy behind Vrienden van de Smaak.

He used the English phrase “back to basics,” which needed no translation. In one sense, the basics are the simple things in life: good food, good conversation, using local products from the land, enjoying the natural surroundings. In another sense, “the basics” refers to the style of dining: everyone uses the same plate, fork and knife throughout the meal and each course (except dessert) is served family style from large platters. 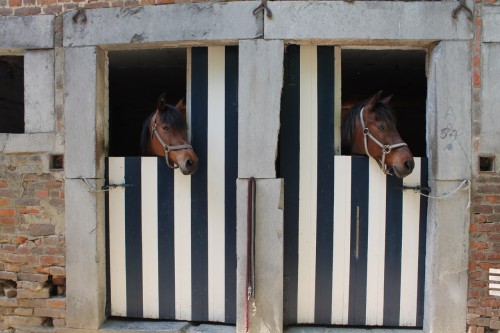 After the introduction, we received a guided tour of the premises, which includes a recently restored monumental tithe barn from 1734. Following the tour, we passed through a gate leading to a wide lawn where a long communal table was set. Everyone found a seat and then looked around to see who their dining companions for the evening would be.

The long table and common serving platters are designed to bring people together. For Bastiaens, it’s not just about the food. “We want to bring people together in real life. We want people to meet each other and have a real conversation.” The vrienden, it turns out, are just as important as the smaak. As he puts it, “With friends you are not formal. With friends you are casual, you don’t have stress.”

The dinners are relaxed and informal, with Didier and his minimal crew serving in jeans and t-shirts. “It’s not the theater you make around the food, but the food that’s important,” he explains. “Pureness and authenticity, that’s what’s important, and not whether I have five wine glasses on the table.” 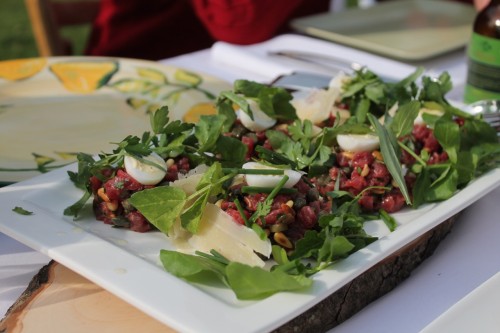 And yet the food was anything but casual. The first course, beef tartare garnished with local watercress, was served with La Cress, a crisp, blond beer made with watercress. This was followed by my favorite dish of the evening, salmon marinated in Wilderen Gin and served with tender green Regalys asparagus from Gingelom—a surprising treat here in Flanders, where white asparagus usually holds sway. Jessenhofke RGLR, an organic blonde beer, complemented the fish nicely.

The main course was served in two installments: first slow-roasted local pork on a bed of farro, fava beans and celery, then pork cheeks braised in Wilderen Cuvée Clarisse, a dark brown ale. The meat was meltingly tender and flavorful, and the mix of plump beans, earthy spelt and crunchy celery the perfect accompaniment. Herkenrode Bruin, beer from the abbey’s own label, provided an appropriate pairing in terms of both taste and its historical associations with the location. 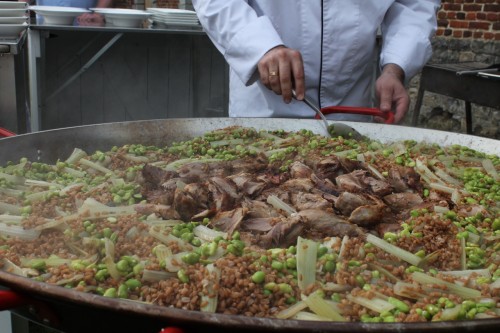 The main course was cooked in a giant paella pan

The quality and variety of the dishes are all the more impressive when you consider that everything was produced in an outdoor kitchen comprising two charcoal grills and a large gas-powered paella pan. The chef and his team labored furiously for the four-odd hours that it took to serve the four seated courses, all within view of the diners.

After dessert—fresh berries with a granité of Wilderen Kriek—we were invited to move into the barn for coffee and tea. By this time, the sun had almost dipped below the horizon and the table was in shadow. Once inside, we mingled anew with our fellow diners and nibbled on petite apple turnovers. It was a cozy and intimate end to a beautiful day.

The dining table after our meal

A highlight of the 2014 season will be a dinner at a private castle in Sint-Pieters-Voeren with the chef of Michelen-starred restaurant Château Neercanne. One dinner each season is completely meatless, prepared by Njam! chef Philippe Van den Bulck. This year, the vegetarian meal will take place in September at a former railroad fort outside Antwerp.