Industrial past meets a green future

Belgium’s only national park has a new gateway, and it’s unique in many ways. For one thing, it’s not actually located in Hoge Kempen National Park, but adjacent to it. And that’s not the only way in which Connecterra is different from the other five recreation areas that provide access to the park. 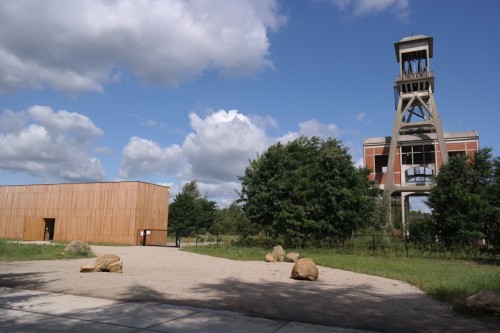 The new park is a gateway to the Hoge Kempen

Located just to the east of the Hoge Kempen on the site of a former coal mine, Connecterra combines the natural environment with Flanders’ industrial heritage. Eisden, in the municipality of Maasmechelen, was one of seven mines in Limburg, and was active from 1922 until 1987. When the mine closed, three large hills comprised of waste material from the mines were left behind. Today, those hills are covered with vegetation and comprise the main features of Connecterra’s landscape. 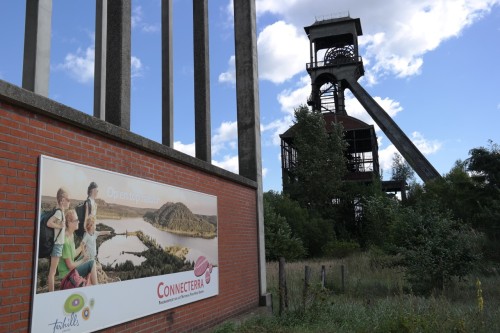 The new park is also dominated with more visible relics of the site’s industrial past: two distinctive headframes that once crowned underground mine shafts now greet visitors at the entrance to the park. The older of the two dates from 1921 and is completely original. The other headframe is a reconstruction of a 1926 structure. Visitors can climb the staircase to the lower platform, at a height of 12 meters, for a panoramic view of the surrounding area. 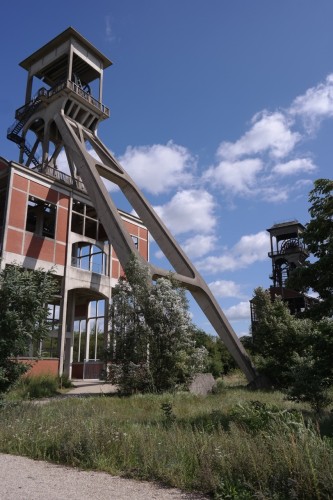 Visitors can climb to a viewing platform

The sixth and last gateway to be opened, Connecterra has the prestigious title of hoofdtoegangspoort, meaning it’s the Hoge Kempen’s main access point. So it’s a little surprising to learn that it’s not enclosed within the boundaries of the national park. The land, along with the rest of the Eisden mine site, is privately owned by the Maas Valley Development Company, which is responsible for other tourism and commercial ventures in the area. It’s all part of a local initiative to find economically viable uses for the former industrial site while respecting its role as part of Flanders’ cultural heritage. 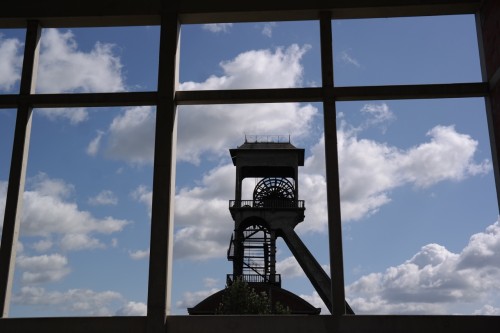 Looking from one head frame to the other

Visitors can choose from four different hiking paths between 1,4 and 10,9 kilometers in length. The two longer paths circle a large lake in the center of the park, and there are panoramic lookout points atop two of the three former slag heaps. The slopes of the three hills provide habitat for a range of flora, birds and insects. Along the various trails, walkers encounter a variety of terrain from shaded woods to grass-covered fields.

In keeping with its status as main gateway, Connecterra boasts a brand new visitors’ center that showcases an innovative construction method. The wood-framed structure, clad in untreated larch, was completed in just five months. Its simple lines and natural materials harmonize with the landscape, and the floor-to-ceiling windows give a panoramic view of the outdoors from within. The center encompasses a reception desk, snack bar and shop. 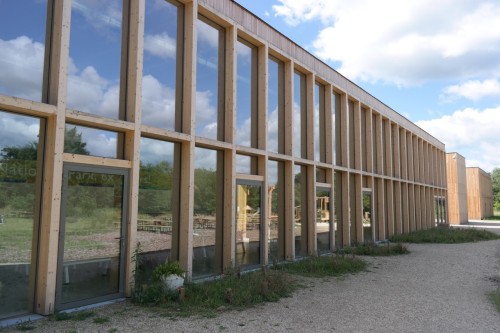 The exterior of the visitor’s center

Kids can play on the big playground just outside the visitors’ center, while a number of picnic tables provide a nice spot to enjoy a cold drink or ice cream. Connecterra is conveniently located next to the tourist information office and Maasmechelen Village outlet shopping mall. A restaurant and cinema occupy former mine buildings at the site, and a luxury hotel is currently in development.