Art & Architecture A new museum of European history in Brussels

A new museum of European history in Brussels

The idea for a museum of European history in Brussels was first proposed ten years ago by the then-president of the European Parliament. This month,  The House of European History opened in the EU quarter and I was lucky to be among the first visitors. 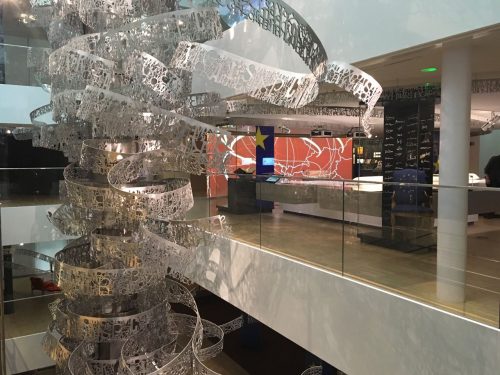 Stairwell sculpture in the House of European History

The museum is divided into two sections: the bottom two floors house temporary exhibitions, while the upper floors present the permanent collection. The permanent display is both chronological and thematic, starting with the question of a common European identity and focusing on events of the 20th century.

The exhibits of the permanent collection are presented without any labels or text.  Instead, visitors receive an electronic tablet and can read the explanations in one of twenty-four different languages.

The story starts on the second floor, which has sections dedicated to the ancient myth of Europa, to changing maps of Europe over the centuries, and to objects that are commonly associated with European culture. On the third floor, a small gallery skips lightly over developments in the 19th century such as the rise of democracy, the industrial revolution and colonization.

Most of the third floor is dedicated to the two world wars and the political developments that surround them. Here’s where the museum hits its stride, with impressive audio-visual displays and large display cases dedicated to the machinery and horrors of war. 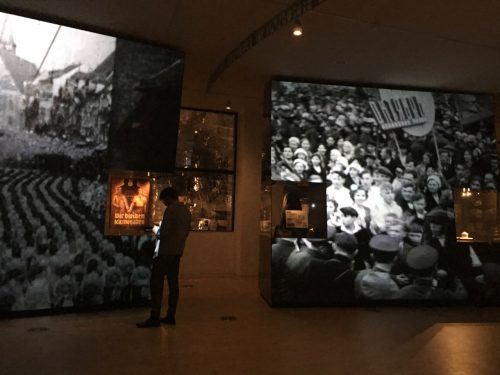 The fourth and fifth floors are dedicated to the post-war period, the Cold War, the founding of the European Union and recent political developments. A small room on the fourth floor, literally hidden from view, deals with the memory of the Holocaust. (Its placement suggests the ambivalence that many in Europe still feel about the issue.)

On the lower levels, the inaugural exhibition is called “Interactions: Centuries of Commerce, Combat and Creation.” It’s divided into two sections: the first is a traditional museum display with sections dedicated to trade, war, negotiation and learning, with wall texts in four languages.

The second section is set up like the rooms of a house with furnishings and everyday objects that tell a story of cultural contact and exchange.  Visitors can touch and play with the items on display, making the exhibit both fun and interactive. This was by far my favorite part of the museum. 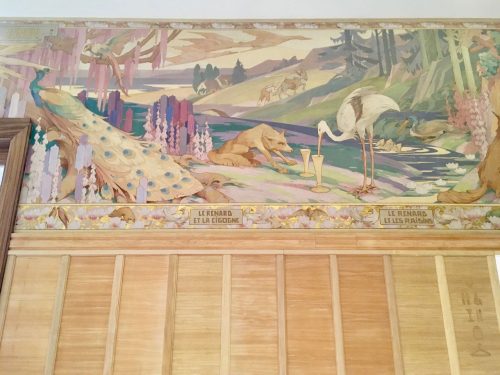 The House of European History is housed in a historic Art Deco building in Léopold Park, a stone’s throw from the European Parliament. The Eastman Building was built in 1935 as a dental clinic for underprivileged children by American philanthropist George Eastman. It has been renovated and enlarged with a modern addition to house the museum.

If you want to learn more about the history of Europe and the founding of the European Union, the House of European History is an excellent place to start.