They are among the greatest artists of the Renaissance, their talent earning them admiration all over Europe and for centuries to come. Their paintings hang in the most prestigious museums in the world and are among the most famous works in the history of art: Rogier van der Weyden, Jan van Eyck, Hans Memling, Hugo van der Goes, Dieric Bouts, Hieronymous Bosch.

Memorial to the Van Eyck brothers with St. Bavo’s Cathedral in the background.

For generations, it was widely believed that Jan van Eyck had invented oil painting, so great was his skill in that medium. Historians today know that he didn’t invent the technique although he reached a level of perfection that is still dazzling to behold. The Ghent Altarpiece, painted by Jan and his brother Hubert Van Eyck, is among the most beautiful and astounding works of the late Middle Ages, universally admired for centuries.

You can still view the Van Eyck brothers’ masterpiece in the cathedral of Ghent, its original home. The churches of Ghent, Bruges and Brussels contain innumerable art treasures, although many were destroyed during the religious conflicts of the 16th century, and many others wound up in the great museums of Europe—in Vienna, Madrid, Berlin and London. Here in Belgium, you have the chance to see these masterpieces in the very cities where they were painted.

Altarpiece of the Last Supper by Dieric Bouts in St. Peter’s Cathedral, Leuven

It’s no coincidence that the greatest artists of Northern Europe lived in what is now Belgium. At the time, these lands belonged to the Dukes of Burgundy, among the richest and most powerful rulers of the age. Brussels, Bruges and Ghent were among the favorite residences of the Burgundian dukes and their heirs, and were also wealthy commercial centers where artists could earn a good living, producing works on behalf of local and foreign buyers.

Rogier van der Weyden was born in Tournai and settled in Brussels in 1435, becoming the official painter of the city. He painted a huge cycle of mythological scenes for Brussels city hall, which were destroyed in the French bombardment of the city in 1695. You can still admire a carved capital on the building’s facade that was probably designed by him. Some of his surviving paintings can be viewed in the Royal Museum of Fine Art. 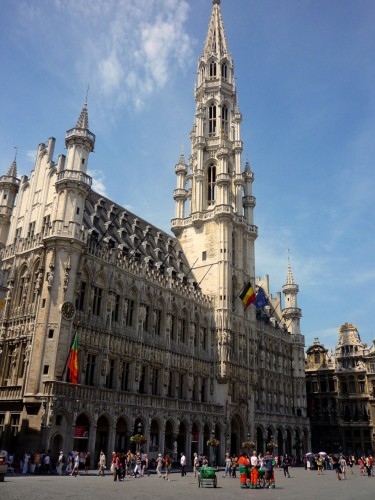 Jan van Eyck was born in Maaseik in the Meuse river valley and later came to Bruges as court painter to Duke Philip the Good. The Groeningen Museum in Bruges houses his beautiful painting of the Madonna and Child with Canon Van der Paele, originally painted for the Cathedral of St. Donatian. You can see a fictionalized account of the painting’s creation at Historium, an interactive historical experience on the Markt.

Hans Memling, originally from Germany, trained under van der Weyden in Brussels and then settled in Bruges, where he had a successful career. The former St. John’s Hospital in Bruges is now a museum dedicated to the works of Memling. He painted two altarpieces and a unique reliquary casket on behalf of the monks and nuns who ran the hospital, works which are still housed in the hospital’s medieval wards. Today, the hospital is the Memling Museum. 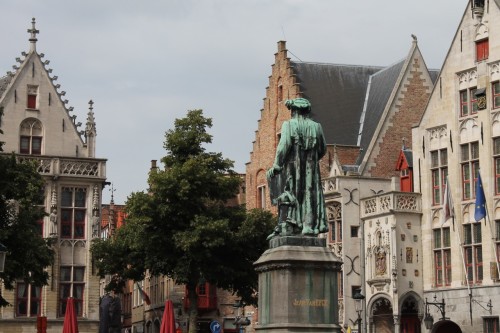 A trip to Belgium is an opportunity to explore the lives of these legendary artists by viewing their works in the same settings for which they were originally created, by walking the same streets where they once lived, and by learning about the glittering world that gave rise to their genius.