The Jenever Museum in Hasselt

The Jenever Museum in Hasselt re-opened its doors on September 19 after being closed for ten months and undergoing a complete transformation. Every aspect of the museum experience has been overhauled, from the buildings and exhibition spaces to the logo, website and even the name. The result is a fresh, modern, interactive attraction that seeks to educate and entertain, while honoring its history and looking towards the future.

One of the highlights of a visit to the Jenever Museum has always been the tasting room, the last stop on the visitor’s route. That, at least, hasn’t changed. The traditional jenevercafé looks the same, with row upon row of jenever bottles lined up behind the polished wooden bar. Your admission ticket still includes a small glass of jenever from the museum’s own selection. Even the admission price is the same (6€). 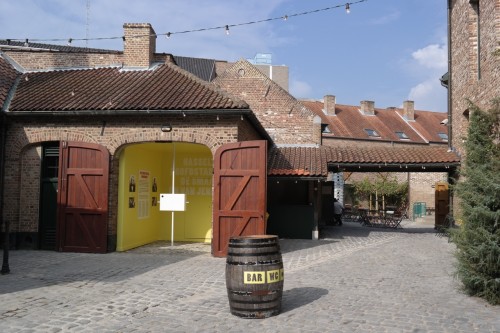 The courtyard of the renovated museum

What’s new is that visitors can now go directly to the tasting room, located off the central courtyard at the heart of the former distillery, and enjoy a borrel without buying an admission ticket and visiting the museum. The large wooden carriage doors that used to remain closed even when the museum was open now stand wide during opening hours, allowing visitors to wander into the courtyard, visit the tasting room and even preview the museum’s attractions in a brightly painted niche with information in four languages.

Throwing open the carriage doors and encouraging visitors to peek inside is not just clever marketing. It demonstrates the museum’s new emphasis on tourism. The museum wants to attract not only museum-goers, liquor aficionados and history buffs, but also the casual visitor who may just want to taste a jenever for the first time or enjoy a cold beverage in the courtyard. 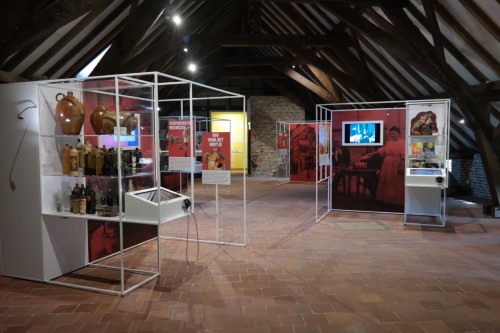 The new museum has interactive exhibits

For those who do venture inside, the museum has updated its presentation for the 21st century, with interactive videos, audio recordings and touch screens replacing the static, text-based exhibits of old. There are educational videos about the production process, vintage TV commercials, recordings of anti-alcohol songs and interactive games. In one room, giant maps let you zoom in and find the names and locations of former, extant and working jenever distilleries throughout the Low Countries.

Jenever (or genever) is a regional product with protected European status like cognac or champagne. It’s a distilled spirit common to Belgium, the Netherlands, French Flanders and a small area in eastern Germany. Sometimes called “Dutch gin,” it is traditionally flavored with juniper berries (jeneverbessen in Dutch). These days, commercial, sweet jenevers come in a wide range of fruit, cream and candy flavors, while “old” and “grain” jenevers stick to the traditional formulations.

In the 18th and 19th centuries, Hasselt was a major center of jenever production, with no fewer than 30 distilleries by the end of the 19th century. The Jenever Museum is vested in a former distillery in the city center, and a 19th-century jenever installation is still used to produce the museum’s own spirits. The former ox barn, grain mill, farmhouse and distilling rooms are now used as exhibition space, with original architectural features beautifully restored and incorporated into the overall design.

The redesigned interior has more space to display items from the museum’s collection, including historic distilling equipment, scientific instruments, jenever bottles and glasses, and advertising paraphernalia. Previously, only a dozen or so vintage advertising posters were on display. Now, vertical, sliding steel frames allow 48 of these beautiful artworks to be seen—although the visitor now has to pull each double-sided frame out and slide it back into place. The museum’s interactivity isn’t just digital; it’s also physical.

Another way in which the museum gets physical is through the use of electronic dummies that show the effects of alchohol on the human body and brain. The touch screen works like a game where the visitor keeps adding to the number of jenevers consumed, while a video screen shows real people experiencing the effects of inebriation and a plastic dummy lights up to show where the effects are felt. The underlying message is for people to consume responsibly.

The old museum had one interactive feature that was quite memorable, and luckily it has been retained and updated. In the “Jenever Academy,” a palette of natural flavoring agents is on display along with glass beakers of their aromatic essence. By squeezing on a rubber ball attached to a glass pipe inserted into a cork in the bottle, you can release the scent of the distillate. The 20-odd flavors include cinnamon, chocolate, liquorice, lavender, sage and cardamom.

Video displays in the Jenever Academy also explain the best way to pour, drink and appreciate genever. By the time visitors exit the room, they’re ready for the last stop on their tour: the tasting room. More than 130 different jenevers are served at the bar. Visitors also have the option of trying one of several Discovery Rounds, each one containing a selection of four jenevers.

The museum’s makeover extends to its new logo, house style and promotional materials. A cleaner logo and bright, modern colors show the museum shaking off its old image as a stuffy historical site and seeking to attract a younger and more varied audience. The museum’s new brochure and website feature a smoky-eyed young woman holding a flaming jenever bottle. 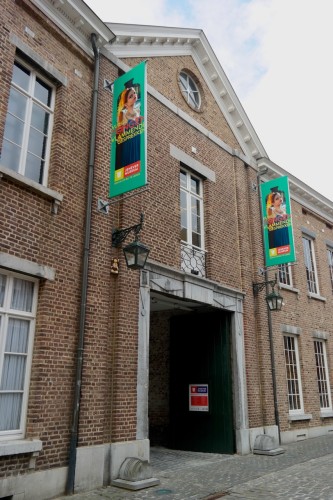 The Jenever Museum is housed in a former distillery

Even the museum’s name has changed. Formerly the National Jenever Museum, it’s now known simply as the Jenever Museum. On the one hand, there’s a greater emphasis on the museum’s local importance. Says museum chairman Patrick Reygel, “All over Flanders, people associate the Jenever Museum with Hasselt.” For mayor Hilde Claes, “Jenever is and remains incredibly important to the economic history of Hasselt.”

On the other hand, there’s a recognition of the museum’s wider significance to the jenever-producing regions of Europe including France, the Netherlands and Germany. The museum wants to position itself as an international resource for the study and preservation of jenever’s history, culture and folklore.

The new Jenever Museum is certainly worth a visit, even if you’ve visited in the past. There’s a lot more to see, learn and experience, and there’s always another jenever to try.