The pier in Blankenberge turns 120

It’s an icon of summers spent at the seaside, a protected architectural monument and a testament to the Belgian coast’s long history as a tourist destination. It’s survived two world wars, destruction by fire and damage by wind and water. The Blankenberge pier is 120 years old this year and is as popular, and as magnificent, as ever.

On any given day, but especially during the warm summer months when the sun is shining, the pier attracts holiday-makers taking in the sights, locals meeting up for a stroll or a drink, families with children enjoying a day at the beach, and seniors parked on benches soaking up the rays. The pier still serves the function for which it was built: giving people the pleasure of walking over the water towards the horizon, of looking out over the sea and back towards shore. 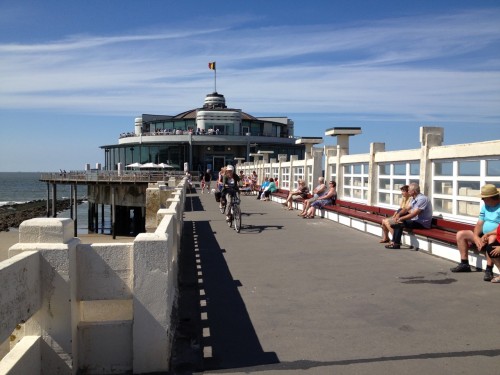 On the other had, a lot has changed since the original pier was built in 1894. At that time, coastal tourism was a relatively new phenomenon, recently imported from England. “Taking the cure” was all the rage then: sea water and sea air were thought to be not just enjoyable but to have restorative health benefits. British tourists arrived first in Oostend in the early nineteenth century, looking for new seaside bathing destinations. At that time, Blankenberge was just a small fishing village.

Tourism in Blankenberge began to take off in the mid-nineteenth century, but the greatest expansion occurred after 1863, when the rail connection between Bruges and Blankenberge was completed. Now travelers from all over Belgium as well as France and Germany began to find their way to Blankenberge, joining tourists from the surrounding region and from across the channel.

So-called “pleasure piers” were also an English invention. Travelers arriving at seaside resorts by ship enjoyed the view from the quay—and the thrill of walking over the water. Soon strolling along the quay became an attraction in and of itself and pleasure piers were built all along the English coast. An Englishman was the first to propose building a pier in Blankenberge in 1873. 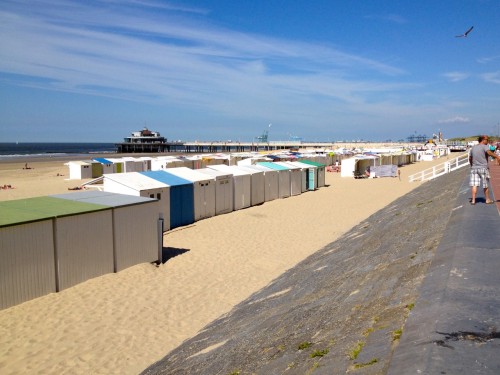 The beach in Blankenberge with the pier in the distance

But it took another 21 years, and three more proposals, before the city got its pier. Built by a private partnership, the “Société Anonyme du Pier de Blankenberghe”, it was the first and last built on the Belgian coast. On the continent, only the pier in Scheveningen (NL) is comparable.

The original pier in Blankenberge was an expression of Belle Epoque optimism and wealth, constructed in iron, wood and glass. A 350-meter-long promenade on iron pilings jutted out from the shore, with a wide section in the middle where a music kiosk stood. At the end, an octagonal platform supported an elegant pavilion topped by a decorative cupola, which housed a restaurant and ballroom. Visitors bought a ticket at the shore end in order to walk along the pier.

It was very much a novelty and a treat in those days to visit the pier, and by all accounts the new attraction was a great success. Unfortunately, the pier, like the Belle Epoque society that produced it, disappeared in World War I. The Germans set fire to the pier in 1914, fearing that England would use it as a landing point. All that remained was a blackened skeleton.

And so it remained for nearly 20 years, until the city drew up plans to rebuild the pier in 1930. The old pilings and foundations of the first pier were reused, but the main construction material was concrete. The new pier opened in 1933, with a domed pavilion in Art Deco style. 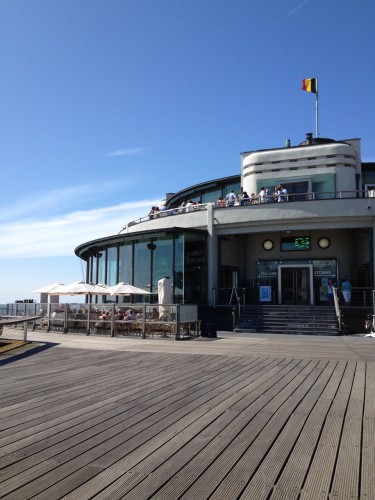 The Art Deco pier pavilion from 1933

During World War II, the pier escaped destruction at the hands of the Germans a second time when the local commander disobeyed orders to blow it up. He reasoned that the water in which the pier stood was too shallow to be accessible to enemy ships and that destroying it was unnecessary. In 1994, the city of Blankenberge honored Sergeant Karl Hein Keselberg for his role in saving the pier.

Between 1955 and 1999 the pier was part of the Meli amusement park (now Plopsaland). By the 1980’s, the concrete was already showing signs of severe deterioration from constant contact with the sea. Plans were drawn up to begin restoration work on the pier, but the renovation only began in 1999 after repeated attempts to have the structure listed as a protected monument.

The restoration of the pier was completed in 2003, the same year that it was finally declared to be part of the architectural heritage of Flanders. Besides repairing and reinforcing the weakened concrete, work included building additional floors under the level of the platform so that the center of the structure now sits in the water, giving it extra stability.

The structure had been saved, but the pier’s troubles weren’t over. The first couple of years after it reopened, attendance was low and the city struggled to find a successful concessionaire for the pavilion. The first tenant was an attraction called Train City, which folded at the end of 2004. The self-serve cafeteria had already shut its doors after a disastrous summer season. 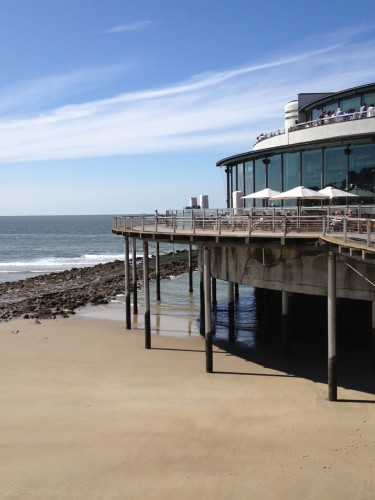 The pavilion houses a restaurant and storm exhibit

In 2007, local entrepreneur Francis Vandendorpe took over management of the pavilion. Since then, he has developed a winning combination of tourism and business activities that has the pier back in the black. Today, the Art Deco landmark houses a modern brasserie, an exhibition about storms and a multipurpose event venue. The promenade and the open walkway circling the pavilion remain freely accessible.

Vandendorpe says that he saw potential in the pier when others saw only financial failure. To him, the problem wasn’t the pier itself, but a lack of vision in its development as a tourist attraction. As he says, “Trains and sea—they don’t go together. It’s a problem. That’s why it failed.” His approach has been to build on the original function of the pier and its connection to the sea.

The Belgium Pier brasserie is open seven days a week from morning until midnight and offers a full menu. Its customers include day-trippers, vacationing families and locals, who come to drink, to eat and to enjoy the view. This is the most popular use of the pavilion—as a place to relax and socialize while sitting high above the water.

The Storms Expo was another logical extension of the pier’s maritime history and setting. The educational attraction was developed in partnership with the Royal Meteorological Institute, the Coastal Division of the Agency for Marine Services and Coastal Affairs, and the World Wildlife Fund. It consists of interactive exhibits on meteorology, weather systems and natural disasters, two storm simulators and a theater showing documentaries on how to survive a major storm. 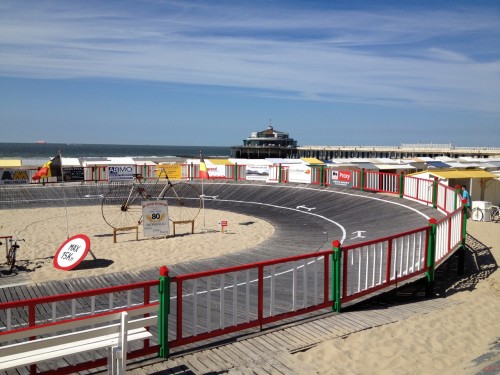 The Velodrome is a classic beach attraction

According to Sebastiaan Defoort, manager of the pier, around 100,000 visitors have passed through Storms Expo since it opened two years ago. He says the exhibition works because it complements the other activities at the pier. “People have a whole day’s worth of entertainment—they can go to Storms, they can have a drink, they can enjoy the beach, so it’s a whole package.”

A large part of the pavilion, including the former ballroom, is available to hire for private functions such as weddings and corporate events. Defoort finds a historical link with the pier’s past in organizing parties with dancing and cocktails where Blankenberge’s high society once wined and dined. The second-floor balcony is especially popular for receptions with its 360-degree view of sea and shore.

The landmark is once more a popular destination, but its struggle against the elements and the weather continues. Just last fall, during heavy storms that buffeted the Belgian coast, several wooden planks and part of the metal walkway were torn loose. It wasn’t the first time in recent years that the pier had to be partially closed due to storm damage.

Still, these are temporary setbacks. The pier has survived worse and will likely weather many more storms to come. 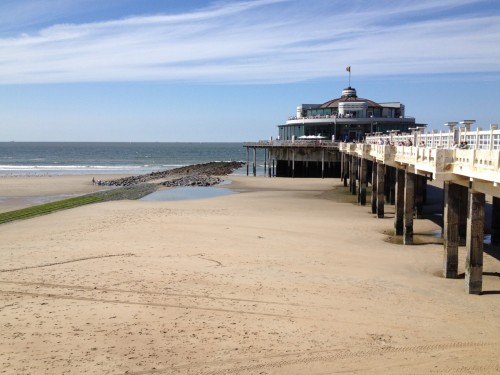 The historic pier is an icon of the Belgian coast

Vandendorpe is optimistic about the future and continues to develop the pier as a tourist destination. This summer, the pavilion will be transformed into a nostalgic “Golden Age Café” with exhibits on the 50’s and 60’s, a 70’s retro pool hall, a sunset bar and a daily happy hour with free tapas. No doubt this will attract more visitors and add to the holiday atmosphere.

And yet… Everything the visitor needs to enjoy a day at the pier is already in place: the sea, the sand, the wide horizon, the wind off the water, and the beautiful pavilion—rising like a great round Art Deco castle above the waves.

A new virtual tour of the pier is online at: http://360.poppr.be/virtualtour/belgiumpier