Three years after a new bridge over the Albert Canal in Vroenhoven officially opened amidst much fanfare, the ambitious multi-functional space built into the foundations of the modern structure has finally fulfilled its purpose. A new visitor’s center called “De Brug van Vroenhoven”, combining two permanent exhibitions with a restaurant and event hall, opened to the public earlier this month. 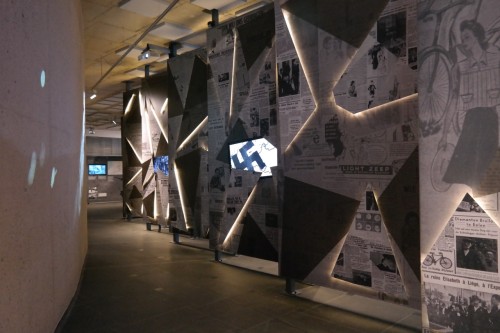 The Bunker tells the story of the German assault

It was always the intention to combine the new bridge complex with some kind of museum that would tell the story of the historic events that took place at the site during the early days of World War II. The former bridge in Vroenhoven is the spot where German troops first landed on May 10, 1940, and where the Battle of Belgium began.

Local resident Marcel Bastiaens was invited, along with other members of the community, to attend a preview before the official opening date on January 10. His grandmother and two of her daughters were killed in the German assault when a bomb fell on their hiding place in the basement of a café. He now lives less than a kilometer from the bridge and visitor’s center.

“The exhibition about the bridge is very interesting—all the more so because it’s about our history here in the area,” he says. “It’s important that the things that happened here are not forgotten.” 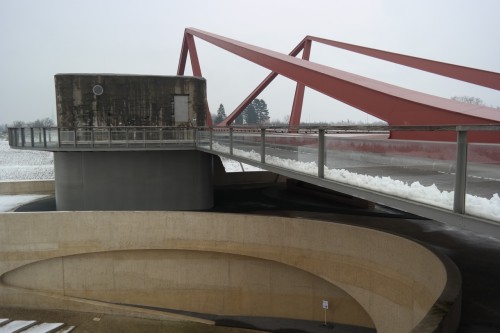 The bridge with the WWII bunker next to it

Together with bridges spanning the canal in Veldwezelt and Kanne and the Belgian military fortress at Eben-Emael, the Vroenhoven bridge was the focus of a well-rehearsed and strategic German offensive that cleared the way for a Nazi invasion of Belgium. The heavily armed fortress, considered the linchpin of Belgium’s eastern defenses and widely viewed at the time as impregnable, fell within hours. Belgian forces managed to blow up the bridge in Kanne but the two other bridges were captured before they could be destroyed.

The bridge in Vroenhoven stood until 1944, when retreating German soldiers blew it up in an attempt to slow the Allied advance. An exact replica of the bridge was rebuilt after the war in 1947. The military bunker on the western bank of the canal was preserved as a memorial to the Belgian soldiers who died defending it.

In 2009, the Belgian inland water authority, nv De Scheepvaart, decided to replace the old bridge in order to eliminate a bottleneck caused by its outdated dimensions. The canal itself had been broadened from its original width of 50 meters to its current width of 100 meters. The planning of the new bridge had to take into account the historic significance of the site, along with the placement of the WWII bunker next to the old bridge.

In a creative engineering feat, the old bunker was placed atop tall cement pilings while the western bank of the canal was carved away around it to make room for the new bridge. This was constructed alongside the old bridge, which was then demolished. Finally, the new bridge was pushed sideways into place. The WWII bunker was integrated into a massive bulwark anchoring the western side of the bridge. Lodged securely under the bridge in the limestone wall of the canal, the modern structure was equipped with ample room for a new visitor’s center.

However, the huge complex stood empty for three years before De Scheepvaart and its partners, the city of Riemst and the provincial tourism office, found a solution for the space. De Brug van Vroenhoven fulfills the designers’ ambitious concept for the bridge, combining two separate exhibitions with a restaurant and indoor event space. An outdoor amphitheater and a wraparound terrace should find use during the warmer months. 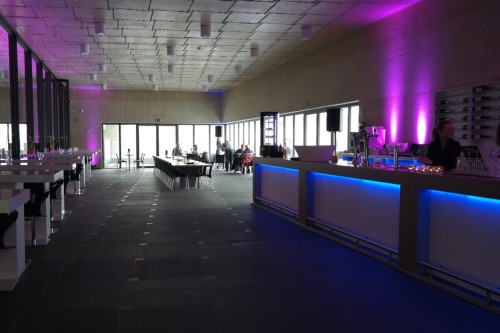 The main focus of the visitor’s center is “De Bunker,” an exhibition about the German assault on May 10-12, 1940. The story is presented through a combination of interactive touch screens, wall text, video clips, archival material, original artifacts and personal accounts. Maps show the positions of the Belgian defenses and detail the Germans’ attack plans. Photographs taken just after the battle document the destruction and aftermath.

The most poignant sections of the exhibition are the video and audio testimony of people who experienced the fighting first-hand. Historical recordings are paired with actor portrayals of the speakers. Modern-day interviews with local residents who were children at the time are captured on video as they relate their memories of those terrible days and the loved ones they lost.

A large, four-sided box floating a meter above the floor turns out to be a memorial to the casualties, both military and civilian, of the fighting. The visitor must crouch down and duck under the walls in order to access the interior, which is ringed with video screens. Dozens of white crosses are suspended in the blackness overhead. Old black-and-white photos give way to a series of video portraits as each person’s story is heard. 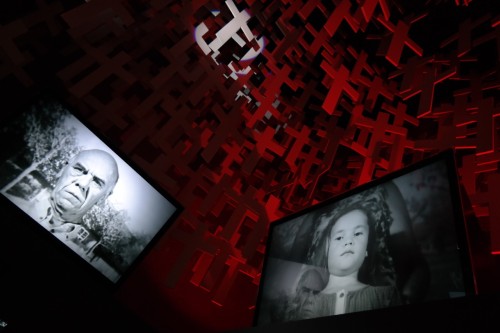 A video installation and memorial to the victims

For Marcel Bastiaens, the exhibition is a powerful reminder of events that are at once both historic and personal. One of the video portraits accompanies the recollections of his aunt, who lost her mother and two sisters to a German bomb. “It’s a reminder of what happened. You don’t think about it all the time. But every family has its story of what happened then,” he says.

The memorial ends with the gradual illumination of rows of lightbulbs concealed in the walls of the box as the video screens go dark. Mirrors behind the panels reflect the brightness on all sides so that the viewer is surrounded by an infinite field of receding points of light. It’s dramatic and powerful, as much experiential artwork as museum installation. 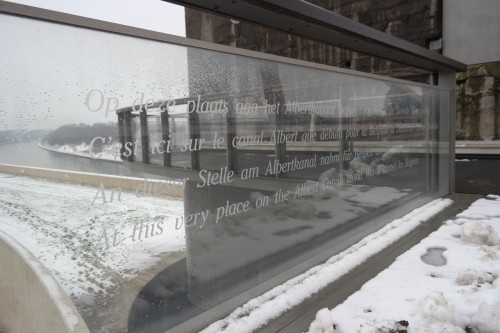 An inscription on the bridge in four languages

After leaving the WWII exhibition, visitors can learn about the canal—its history, how it works, what kinds of vessels ply its waters and what creatures live in its depths—in a second, smaller section titled “Binnevaart Experience.” From there, the exit leads into a spacious restaurant with floor-to-ceiling windows overlooking the canal.

The mayor of Riemst, Mark Vos, as well as representatives of the Flemish and provincial tourism agencies, have all expressed hope that the new visitor’s center will become a popular tourist attraction, doing for Limburg what comparable WWI sites have done for West Flanders. For anyone with an interest in WWII, it’s certainly worth a visit. And for the local population, it’s a long-awaited tribute to the tragic events that happened here nearly 75 years ago.